You might want to monitor the Windows Event Log by using a tool built in .Net which reads certain Event IDs where the Source is the SQL Server. I prepared a small test case which shows how Windows stores the Event ID and how you should (not) read them. I am using a Windows Server 2012 R2 and Microsoft .NET Framework 4 for my test.

To build my simple “Event Log Scanner” I used the following information about the EventLogEntry Class: https://msdn.microsoft.com/en-us/library/system.diagnostics.eventlogentry(v=vs.110).aspx

So first here is my simplified c# code which iterates through all entries in the “Application” part of the Windows Event Log and displays the InstanceID and EventID properties:

Here you can see the results of the above code:

As you can see the InstanceID is completely different from the EventID. So even if the documentation of Microsoft says that EventID is obsolete and InstanceID should be used you will not be able to find your EventID when you are scanning for InstanceID. But let’s see why does InstanceID show a different result from EventID.

EventID is declared as an Int32 and InstanceID is declared as Int64 but actually both refer to 32bits of data. Windows stores the so called “Qualifiers” part of the EventID at the first 16 bits and the last 16 bits represent the actual EventID. To prove this here is the first Event in XML format: 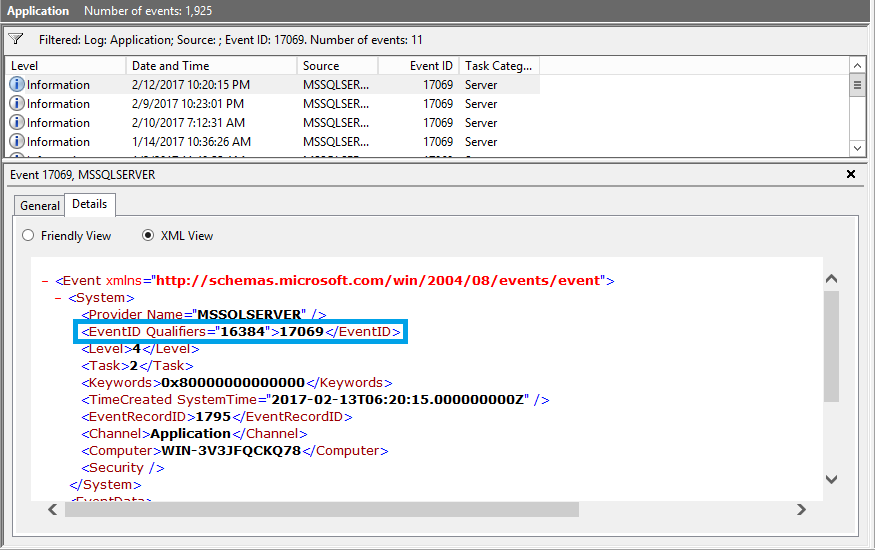 The above examples showed the difference between EventID and InstanceID, namely that EventID reads only the last 16 bits (or 2 bytes) of the Windows Event Log Event ID but InstanceID contains the whole 32 bits (4 bytes) of data.

One thought on “Reading the Windows Event Log – Event ID: Problems with Qualifiers”